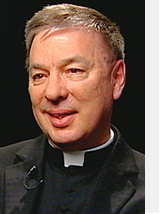 As many of our readers have heard by now, that A. Joseph Indelicato, the founder and president of the Catholic Education Foundation died, quite unexpectedly, on this past July 15.  I ask that all pray for the blessed repose of his soul in their prayers and Masses.  Joe was an indefatigable promoter of Catholic education, and we honor his memory most by committing ourselves to continuing this enterprise he began in 2001.

Having served as CEF’s executive director for the past ten years, I was honored by the unanimous vote of our Board of Directors appointing me president of the Foundation.  I take this opportunity to assert my intention to re-double our efforts to advance the cause of Catholic education.  I intend to strengthen communication within our Board and to make our mission better known to the various publics we serve.  Bringing CEF under the umbrella of the Priestly Society of John Henry Cardinal Newman will also contribute to a more effective mode of operation and, even more importantly, place our endeavor under the patronage of that soon-to-be saint whose primary goal was the creation of a well-educated laity, precisely through the Church’s schools at every level – elementary, secondary and university.

The Board has charged me with moving forward with our highly successful Catholic identity assessment for schools, our annual seminar for priests on their role in today’s Catholic schools, the production of The Catholic Educator, and making available our resources for faculty and administrator workshops.

I ask the continued support of your prayers and financial assistance, as I confidently seek the powerful intercession of John Henry Cardinal Newman.